Superfly Snuka is a big fan of MMA.  He says that he would have liked to try it back in the day.  He also gives a special shout out to ArtV.

Superfly Snuka: I Would Have Loved to Fight MMA 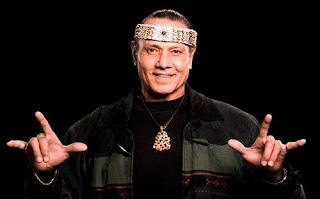 He should fight OJ Simpson for the title of Toughest Guy to Get Away With Murder.


On May 10, 1983, a few hours after Snuka had performed in a WWF TV taping at the Lehigh County Agricultural Hall in Allentown, Pennsylvania, Snuka placed a call for an ambulance. When emergency personnel arrived on the scene at Room 427 of the George Washington Motor Lodge in nearby Whitehall Township, they found Snuka’s girlfriend, Nancy Argentino, in bad shape. She was transported to Allentown's Sacred Heart Medical Center, where she died shortly after of "undetermined craniocerebral injuries." Deputy Lehigh County coroner Wayne Snyder said “Upon viewing the body and speaking to the pathologist, I immediately suspected foul play and so notified the district attorney." Snuka was the only suspect involved in the subsequent investigation. Charges were not pressed against Snuka, although the case was left officially open, meaning no official judgment on whether the incident was accidental or homicide was ever made. In 1985, Argentino’s parents won a $500,000 default judgment against Snuka in U.S. District Court in Philadelphia, although Snuka appears not to have ever paid, claiming financial inability to do so.[8]

I trained with Snuka a few times around 2000/2001 when I was just getting into Indy Wrestling. My trainer Dan Magnus was friends with him. Let's just say that I loved him as a kid, but after meeting him the first thing I noticed was that the guy was probably a bit "touched" in the head. He was all sorts of crazy.

of course he was touched, that why he was such a character.

one of my faves because he was wacked in the head.

you have to be to jump off a 20 foot cage knowing your gonna miss.

Him, Angle and Mick foley are in teh same crazy tree together.

one thing for sure, you aint knocking Snuka out, brudda.. thats a chin of iron right there

My friend who was a jobber and Michael Hayes both have a legendary Anika story. ...... So 1 night snuka was wrecked and they were thinking of pulling him for the night, well snuka marches back to the locker room, the group heard ALOT of sniffing sounds. Snuka comes back and says"NOW SNUKA FUCKED UP!!!" and marched to the ring. AWESOME

Nah foley is awesome. He wrote 3 really good books without a ghostwriter.

Didn't know about the GF thing until just the other day.  That kinda sucks.

I have a Superfly "Giant Foam Finger" in my basement.  I've had it for probably 30 years now.  I used to love watching Jimmy Snuka

I met him before. He was a rally nice guy. He didn't kill that girl. That was a wiki pedia cut and paste job.

Dawkins - I met him before. He was a rally nice guy. He didn't kill that girl. That was a wiki pedia cut and paste job.

Hope you're not a defense attorney.

Met him the night of my bachelor party.

Dude couldnt walk to the car without his mgr. holding him up!

TheGARV -  Didn't know about the GF thing until just the other day.  That kinda sucks.

Sounds like there were no charges 'cause there wasn't enough evidence. I doubt the DA just said "Oh it's Jimmy Snuka in 1985, I'm not booking him for murder." And with the term "default", it sounds like he didn't appear for the civil suit. Sure, not showing up to fight it, and losing, don't look good either way, but you can't just say "Oh he's a killer, case closed." by any stretch. He called the ambulance. It's not like he dumped her body.

Dude, it is well known that Vince McMahon made sure he was pulled out of that bind with the cops.

xeducatex -  The snuka murder is wrestling lore. No one knows for sure if it's just made up or not but if it isn't made up it kinda makes u wonder what snuka did for McMahon to cover up that shit. I think he prolly did it.

No, it isn't lore.  It is established fact.  He tried to say she based her own face in while falling down over and over.  McMahon paid to get him out of the bind.  Dude got away with murder.

Further reading for you (it ain't pretty):