"Now if you want some, you get some," Lawal said. "I'm just saying. You fought Bonnar and Bonnar has been gone for two years. That's fine. I'll Django your ass. Straight up, Django. I will bust your ass, straight up. I'm serious."

Ortiz, who had earlier indicated he'd be fine with fighting Lawal, brushed off Lawal's belligerence..

"Everyone wants to fight me," Ortiz said. "Get in line."

We aren't exactly sure what King Mo means by 'django your ass', a reference  to the 2012 Blaxploitation film Django Unchained by director Quentin Tarantino.

I think Tito can take Mo out.

I guess ever since Zimmerman Mexican dudes are considered white now.

Tito is a shell of his former shelf..Tito could barely beat a sloppy Bonnar so..king Mo would wreck him now..

mo and rampage would destroy tito

I assume to Django someone means to whip they ass like Django did to those plantation slave owners.

Dis racist! Tito is mexican, bro. He has nothing to do with ''Django''.

Tito got pretty quiet. He knows he has no business in cage with mo. In his prime he would have pounded him but not today

It's quite obvious he means he will play Tito like a gypsy guitar...c'mon people

I once saw a film where Jenna had her ass Django'd.

Anyone else think Mo was going to finish with a quote from this song instead? 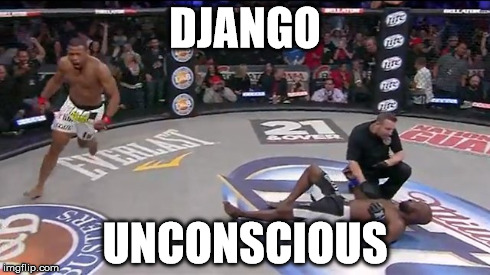 More of that good ol racism from Lawal. Can't stand the guy, and his fighting style is boring. Lose, lose.