Sorry for the weird thread title, the full title of this piece is "Why Machida was Right, Jones was Wrong, and Belfort is Intriguing". This is my first opinion piece in a very long time and I'd really like to hear your feedback on this one.

I know the UG isn't much for flaming but in case anyone is worried that I'm going to be bashing Jones, I'm not. This is a piece about training camps, match ups and technique.

Hope you don't mind clicking the link and please do let me know what you think. 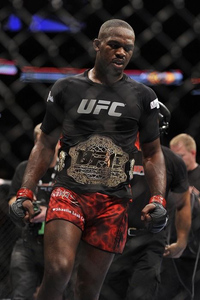 UFC 152 was recently thrown into further confusion with the news that Lyoto Machida had turned down a rematch with Jon Jones. While many saw this as the second "duck" by a major fighter in 24 hours, Lyoto Machida's choice not to fight Jon Jones makes a lot more sense than Jones' decision not to fight Chael Sonnen. News has also emerged that Vitor Belfort will be stepping in to face Jones at UFC 152 - a very brave call for a middleweight - and it is certainly worth considering how the two fighters match up.

A great deal of speculation has been made around these fights and fighters and around who is ducking whom but I hope that I can bring some of the technical information about what happens in camps and in the cage to light where other writers would stick to gossip.

Why Machida was Right to Turn Down Jones

The news that Lyoto Machida was scheduled to fight Jon Jones at UFC 152 on September 22 was puzzling to me. It bewildered me that Lyoto Machida would take a rematch with so much to work on in his game at such short notice. Lyoto Machida was stopped pretty emphatically by Jon Jones in their last meeting due to Jones' better wrestling and, more importantly, due to Jones exploiting holes that have always existed in Lyoto Machida's striking game. The error that Jones exploited in Machida's striking is not something that can be changed overnight, it is something that Machida has had trained into him since infancy under the karate tutelage of his father.

The sport of MMA is a bizarre one in that a single quality victory will make everyone forget how you lost your last fight and leads to demands for an immediate rematch of the lost fight. Cain Velasquez showed no inkling of improved striking defence in taking down and pounding out the wrestling averse Antonio Silva, yet it was somehow enough to convince UFC brass and fans that a rematch with Junior Dos Santos was in order. The exact same thing happened with Lyoto Machida when he knocked out Ryan Bader as the latter gave up trying his hand at strategy and rushed Machida with his right hand loaded behind his head and his chin leading the charge. Ryan Bader was not trying to exploit the hole in Machida's counter-punching that the Jackson's MMA camp have already demonstrated and Ryan Bader is a far, far cry from Jon Jones.

For those who haven't read my Judo Chop columns I will briefly reiterate just how Jon Jones beat Lyoto Machida in their first bout. Machida comes from a karate background, and that is what gives him the confidence to back up for a round and a half and then dive in with a counter as soon as the opponent over commits. Machida uses the same counter every time - a straight with whichever hand is his rear hand (he switches stance often).The difference is that Machida's karate technique is not good boxing technique:

Machida can get away with pulling his passive hand back to his hip when he is southpaw and his opponent is orthodox due to his head moving outside of their lead hand and being safe from the left hook. What Jones did was to switch to the same stance as Machida, fake a kick to cause Machida to counter, and then connect a rear hook on the side that Machida drops his hand. (G) This was also not a one off event in the fight - Jones hit Machida with a hard rear hook on the jaw in the first part of the second round - showing not just how open Machida is to this punch.

You will remember from the Ryan Bader bout that Lyoto Machida finished his opponent with a counter from the same stance - identical to the one that Jones exploited.As Bader ran in with a terrible right punch Lyoto's lead arm was in the position to take the some of the power off of it, but Lyoto still ate some of it's power, as you will notice in the bottom right frame. (G) (G) 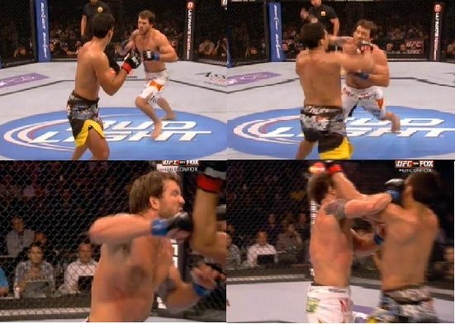 Clearly Lyoto has been working consciously on making sure his non-punching hand is in position to block Jones' attempts to counter, but this was just a month ago and he still got clipped by Ryan Bader who is an inaccurate striker for the most part. To take a fight next month with Jon Jones would simply be lunacy when Machida has so much specific work to do on his style and gameplan. Lyoto has the tools to defeat Jon Jones, he demonstrated that in the much referred to first round of their bout, but to rush a title shot would be throwing away what could be his last chance at the light heavyweight crown.

Why Jon Jones Was Wrong To Turn Down Chael Sonnen

As always you get one of my VTFU for the day, and I will share this o the smaller forums for you.

in for later read.

UGCTT_LnPninja -  As always you get one of my VTFU for the day, and I will share this o the smaller forums for you.

Cheers so much man. Any and all publicity in forums is absolutely awesome for me =)

Jack will you make an analysis of Gustafsson-Shogun in the future?

Gokudamus stole my name - Jack will you make an analysis of Gustafsson-Shogun in the future?

The number of big name fights per card is really low at the moment, so every single fighter I know is likely to get a break down! ;)

Good read, wish they had a VTFU for phone apps

we've already seen jj vs lyoto, so vitor is good

Good to see this. Just as all threads seem to be failing, you sir knock it out of the park.

Good read. I'm excited for this fight, very intriguing. Vitor back at 205 trying to put the champ to sleep. Lyoto will get his shot soon enough, throwing new challenges at the champ is a good thing.

It was kind of a bizarre idea to have Chael fight Jones coming of that loss to Anderson. If Jones wins it looks like Pacquiao beating Mayweather's leftovers. If he loses, it's just a disaster.

I don't think he's affraid of either Machida or Belfort. He beats either easily and if either of them win, it would probably be via the proverbial "lucky" shot.

Will vote up when home

Nice Jack. Good to see we have another flavor of the "new Vitor" moniker, too!!

jack slack. telling it like it is, as usual.

Jack, honestly, you give the best breakdowns and provide unparalleled insight in the striking arts. I've been here for a long time and have read countless opinions and breakdowns online. Nobody is anywhere near you. You are truly an asset to this forum and by that I don't just mean I love watching the old fights you post or that you're a super funny guy who always makes me laugh. I learn something from every single article you post, and there hasn't been one other poster on this forum all these years that I can say the same about.

I hope the higher ups here truly understand just how much better you make this place. You rock, thank you!!