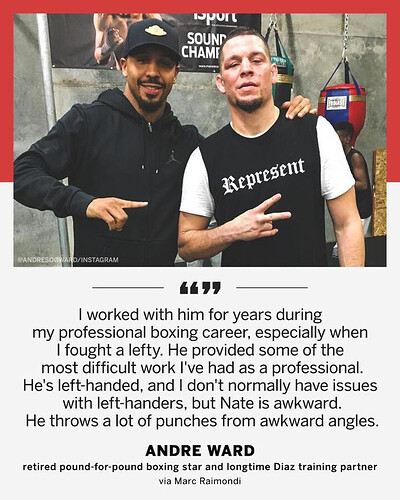 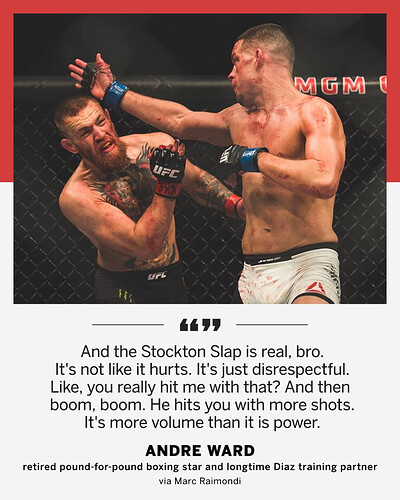 Leon has 12 fights in the UFC (not counting Belal) and he’s knocked out 2 guys.

This is one reason I think Diaz may be able to pressure him into late rounds and win. Leon is not the KO artist everyone including himself thinks he is.

Well there we go, and I’d have to say the Miller he fought is probably his best win, Jim was a fucking handful back then and more impressive than beating either Conor or Pettis at WW.

So with that being the case, the odds for Leon to win this seem good. Although I’d agree with the 5 round point, a bet on Nate to win by KO in the 5th might be worth a punt at the odds you’d get

Has leon fought 5 rounds? 1st ever 5 round non title fight and not main event ever. If it gets past the 3rd Nate’s gonna take him into deep waters and drown him

While your post is true, I look at it a little different. It’s been a VERY long time since Nate beat someone who was in the top 5 of the weight class they were fighting in. Yes, he beat Conor at 170 when Conor was the champ at 145, and training for a fight at 155…but beating Conor at 170 when he hadn’t yet fought for the UFC at 155 is vastly different than beating a top 5 guy at 170.

Even with Pettis, yes he beat Wonderboy, but that was a bit fluky. The dude lost 3 in a row then alternated wins and losses for his next 6 fights (yes, he went 3-6 over the span of 4 years) and is clearly losing just about every exchange in the wonderboy fight and lands a huge punch and gets the stoppage at the end of the second round. So yes, he was likely ranked after the win, but nobody thought he should be there, and nobody would have picked Pettis in a rematch with Wonderboy. Dude was getting finished by 145ers and 155ers, so it’s pretty clear he wasn’t going to be a contender at 170.

Nate’s a really fun fighter, but this is pretty clearly the toughest fight of his career. Leon is a legit 170 pounder on a big winning streak.

Unfortunately Nate is getting smeshed. Helps I’m English. But Nate’s never faired well at the top of the division.

I love Nate and I love this fight. But sucks as I’ll be pulling for Edwards

I was just busting your balls over the rankings thing, but honestly I agree with everything you said. You are 100% right.

Who has Nate ever went into deep waters with?

Pretty sure it’s only 3 rds

I fear this may be a depressing fight for 209 fans. I foresee it looking similar to Rory x Nate 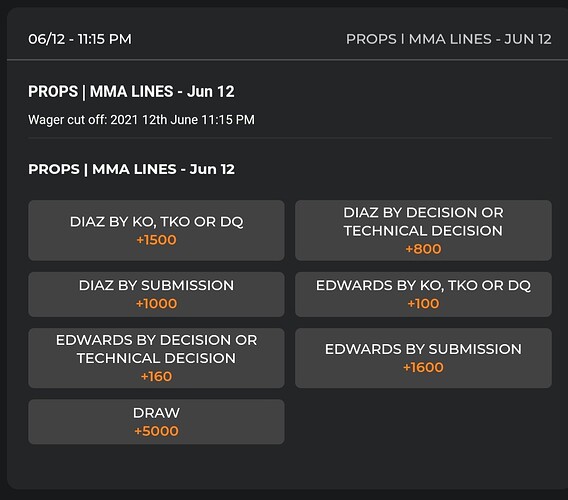 Potentially easy money … has a Diaz/Cerrone feel about it

Where can I bet on these props? I’ll put $25 on nate getting a tko/stopage.

Never bet there before, but they sponsor Teddy Atlas’s podcast.