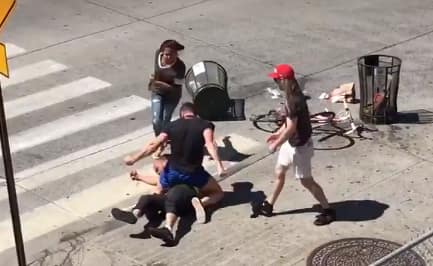 The average sheila is bloody useless in a fight. Best to train her to call the coppers.

That looked more like that guy using his jiujitsu was lucky that small girl wasn’t a larger man or she didn’t have a knife.

If anything that showed jiujitsu isn’t great for fighting more than one person.

I don’t know why her didn’t smash that girl or something. I’d have likely been swinging that bicycle at them like I’m Conan the Bikebarian.

Women do not need to interject themselves in the affairs of men. Call the police, go get help. But do not jump in.

Some striking would have went a long way there. If the girl had been a guy he would have been KO’d.

That could have ended very badly for the BJJ guy.

Favor strikes when fending off more than 1 opponent

That retard in the red hat deserved a broken jaw. So did that stupid female.

So you think BJJ is effective against “multiple attackers” because he was hanging on against a small man and his slap-happy but game wife?

He let that guy give him a 2 piece afterwards

he also would have punched he in face if a guy

Should have grabbed the cunt by the hair and make her start headbutting her guy.

" It’s hard to say who was initially at fault here, but blue’s knowledge of jiu-jitsu enabled him to take control of the ensuing fight, despite it being a two vs. one situation."

That is not a real two vs one situation in my book. He got hit by a woman when he was in mount. If he was fighting two dudes like that he could have easily been slept when the guy he did not have mounted cracked him in the side of the face and he would have never seen the punch.

My uncle was kind of a notorious figure here in okc.
He owned about 5 bars and was a bookie before the internet came along. He always told me when confronting a man and woman always knock the shit out of her first. Then deal with the guy

You could fight three untrained women in 3 on 1 on the street using only wrestling techniques and do a lot of damage to them and its still not going to speak to wrestling and wrestling alone being a good option vs three men with street fighting experience.

What is that ? I’ve been known to neutralize multiple opponents with my systema training so it can’t be better than that

other way around plus u be locked up

other way around plus u be locked up