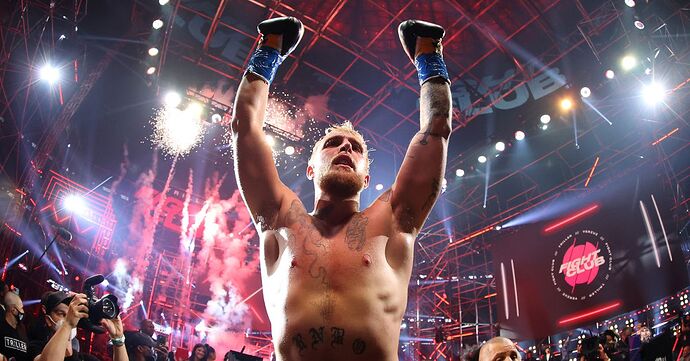 Jake Paul has answered a challenge from Dana White with a counteroffer of his own to take on Jorge Masvidal as well as proposing a fight between Amanda Nunes and Amanda Serrano. 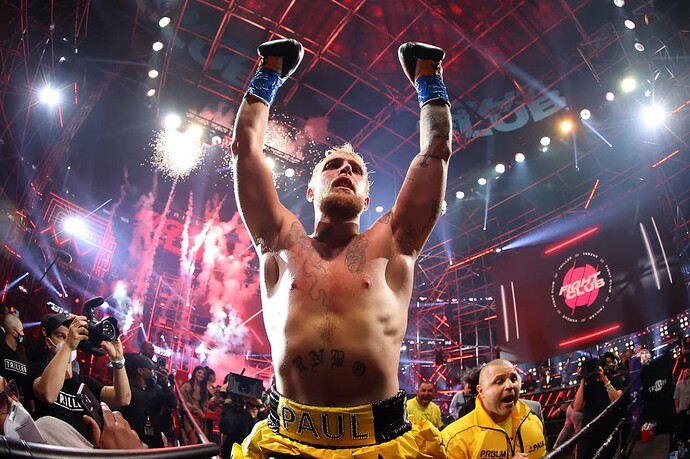 Jake Paul isn’t interested in fighting Anderson Silva next in boxing, but he’s got a wager to offer UFC president Dana White to let him face Jorge Masvidal instead.

Fresh off a win over ex-UFC champ Tyron Woodley to move his record to 4-0, Paul proposed a showdown against Masvidal for his next fight after he engaged in a war of words with the “BMF” champion through interviews and social media.

White answered that challenge following the latest episode of The Contender Series on Tuesday night by reminding Paul that Masvidal was under contract to the UFC but Silva was available for a fight after he demolished Tito Ortiz with a brutal knockout at the Triller Fight Club card this past weekend. Silva has now won two boxing matches in 2021 after vanquishing Julio Cesar Chavez Jr. back in June.

While it appears Paul isn’t taking the bait where Silva is concerned, he’s willing to make a counteroffer to White in order to make the Masvidal fight happen while also proposing another fight featuring a UFC star taking on a boxing champion.

“I want your star talent,” Paul said on social media in a post directed at White. “Your ‘in their prime’ strikers so I can exploit their lack of boxing ability. So let’s do this: me vs. Jorge Masvidal and Amanda Serrano vs. Amanda Nunes.

“If we win, you let any of your fighters fight me going forward. If we lose, I leave you and your exploitive business alone. Dana … Dana … Dana…?” 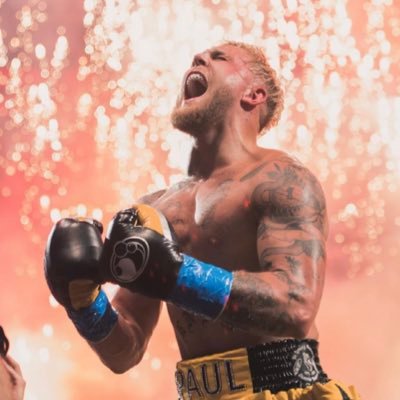 @jakepaul
. @danawhite why you so scared to get embarrassed? https://t.co/xehnZaDva4 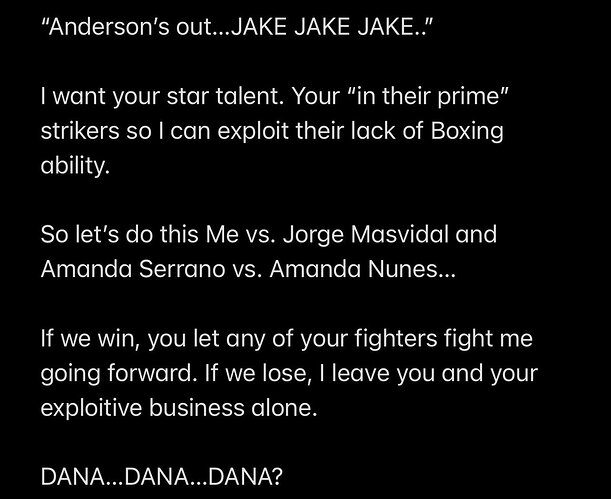 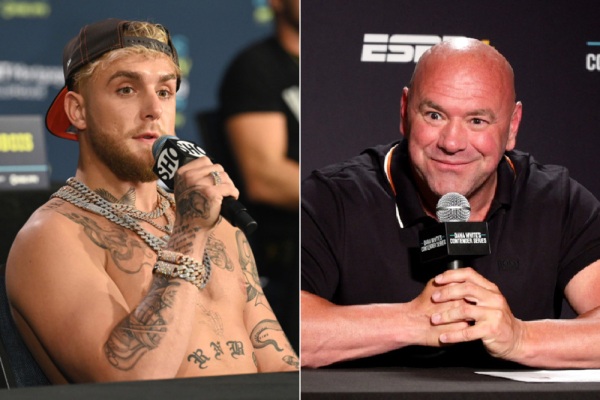 Jake Paul makes another play at fighting Jorge Masvidal and asks Dana White, “Why you so scared to get embarrassed?” 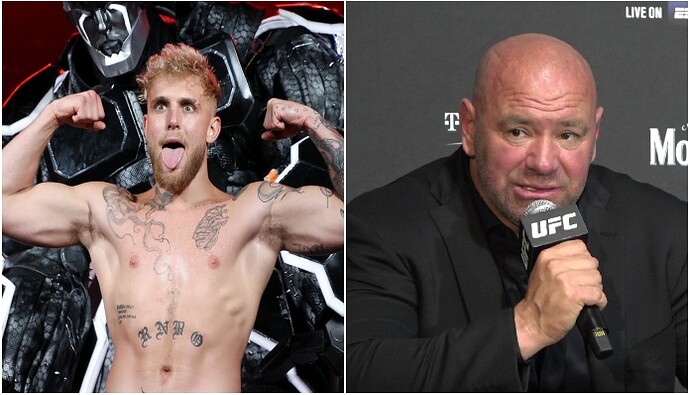 Jake Paul issues a bold challenge to Dana White: 'Why you so scared to get...

Jake Paul has issued a bold challenge to UFC president, Dana White after the UFC boss told him to fight Anderson Silva.

I think Paul should fight Rhonda. I mean, she can beat Cain Velasquez. Paul should be light work for her. Worse case, she dies in the ring in Travis Brownes arms (ala Apollo Creed) and then we get Paul VS Browne… 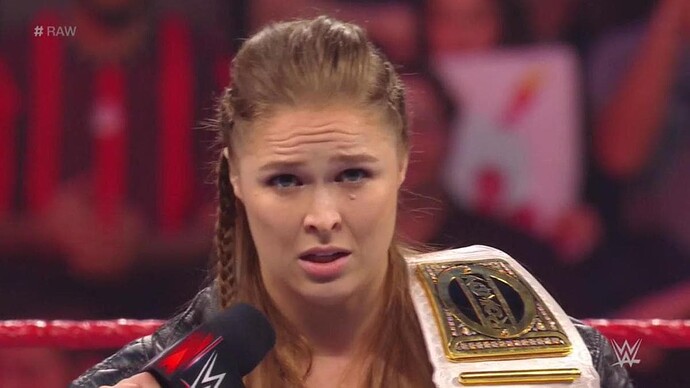 This is actually a very smart play, I finally understand why he gave her $500,000 extra. Just brilliant as in a Boxing match she would beat Nunes and Jake has lots of size on Gamebred, I think they would go 1-1 (with Jake losing to Mas) but he would put a dent in the women’s division and honestly who knnows what his endgame is, he (+ his team) is very good at this though.

He talks tough but he knows his limitations. Even at 46 years old Silva would make him look stupid.

I think Vitor KOs him also.

Even if Dana was inclined to let any of his fighters not named Conor MgGregor go off and box he’d still want Jake to fight someone his own size.

Smart move by Jake but it looks like Dana called it. Jake Paul doesn’t want any part of Anderson Silva. Dana should give him Alex Pereira if he wants an ‘in their prime’ striker from the UFC.

Win/win - either Paul dicktucks or is stupid enough to accept, in which case Pereira would KTFO him and have enough buzz to immediately challenge Israel.

I suspect a lot of people would pay to watch Paul get executed but he isn’t stupid.

So far his MMA opponents have been 1) grappling-based, 2) past their prime and 3) smaller than him.

Pereira isn’t any of those and Paul knows better than to fight someone like that under any rule set.

Anderson is only one of those and would obviously be a huge step up in competition for Paul.

Paul has reached his ceiling. Any increase in competition, AND I MEAN FUCKING ANY, he’s getting starched and this weird, drawn out freak show is over. He better keep fighting undersized wrestlers.

I suspect a lot of people would pay to watch Paul get executed but he isn’t stupid.

So far his MMA opponents have been 1) grappling-based, 2) past their prime and 3) smaller than him.

Pereira isn’t any of those and Paul knows better than to fight someone like that under any rule set.

Anderson is only one of those and would obviously be a huge step up in competition for Paul.

It would give Pereira some buzz just to offer it and mock Paul for being afraid of him.

After seeing him against Woodley I’m pretty confident that any MMA fighter who’s a decent striker and isn’t completely shot would rek this asshole.

This is basically non-responsive from Paul, which I suppose is the smartest thing he can do.

Beating Anderson would be a huge feather in his cap, and could absolutely be used as fodder in Paul’s claimed mission of “exposing” MMA fighters lack of boxing ability. I mean Dana was literally JUST SINGING Anderson’s praises, right? Imagine the “how do you like them apples” attitude Paul could have if he smashed Anderson in boxing after all of Dana’s comments.

The problem of course is that Anderson would murder Paul and Paul knows it.

So Paul now rejects the Anderson suggestion claiming he wants “star talent” that is “in their prime,” which he clearly did not want when taking on either Woodley or Askren.

Up the stakes is all. If, and it’s a big IF: Jake accepts Dana’s challenge, and IF he beats Anderson, Dana agrees to release any present and future UFC fighter Jake calls out to a boxing match (against himself or anyone in his to be formed boxing promotion).

Will BLAF agree and sign to that? Ball would be in his court…

(BLUFF the BLAF how to cross-promote by force)