Poirier Reveals He Was Offered CC

I think the fight is dumb. Does nothing for Colby with a win. He should open his big fukin mouth and call out chimaev

Colby is an all American STUD

a stud with a broken jaw and chipped tooth…

I dont have the patience to listen to a podcast. but if anyone has the time, they talk about UFC not doing Nate vs Dustin despite both fighters and fans wanting it 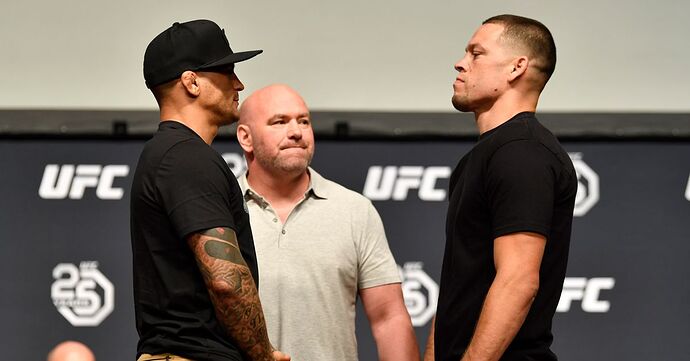 Heck of a Morning: Dustin Poirier vs. Nate Diaz is right there for the UFC —...

The virgins from mmafighting have a podcast?

Its funny how he thinks hes a bigger draw than CC.

How can colby fight rn?

Hes suing masvidal for brain damage and shit, then take w fight in the midst ?

Its funny how he thinks hes a bigger draw than CC.

Everyone who fights conor and wins thinks they are a massive draw all of a sudden. Might have helped Nate but he had a big fan base already, khabib is still undefeated and took out Dustin and Gathje. Dustin though is still the guy who lost all his title fights, could not become champion other than in his own mind. The conor win went to his head

How can colby fight rn?

Hes suing masvidal for brain damage and shit, then take w fight in the midst ?

Thats the reason Dustin is doing this, he knows Colby wont take the fight right now, down the road when Colby does want to fight then dustin will refuse and say Colby already ducked him.

Dustin wants nothing to do with Colby, he knows he will lose, this is him trying to act hard when he knows they wont actually fight

It’s gonna be interesting to see how Colby can handle Dustin’s punching power.

It would be more interesting to see if Dustin’s power moves up to 170 with him. I’m not so sure it does. Also as one poster pointed out his movement is Taylor made for someone like Covington to get his hands on him and he’s going to get put on his back.

Covington isn’t a small 170er and Dustin used to make 45.

Dude was gassed BAD after 2 rounds with Charles. Now he’s BuLkInG uP and he’s calling out a wrestler who’s known for drowning his opponents

Covington isn’t a small 170er and Dustin used to make 45.

Interesting take considering how many people are talking about how big Dustin is vs how small Colby is for 170. I’m looking forward to it regardless.

I do believe Colby could make 155 lol

Its one of the worst examples of faggot behavior in mma recently. Really sad as I used to be a fan.

Same man, ever since he beat Conor the first time shit went to his head or maybe we just see his true self? He seemed like the nice guy but maybe Colby was on to something calling him fake, and i hate colbys shtick (but cant deny his fighting ability)