Over the past few years, I've been occupied with two major projects. The first was helping build and develop the NYKK Gyms and the NYKK team. This, obviously, benefited the members of our two facilities directly. My second project was establishing King of San Da USA. I believe that through these efforts I have helped many athletes who wanted a venue to test their skills, get experience and get better.

Today, I am announcing the formation of San Da Training Systems, which I hope will help even more people by spreading a program which I believe not only offers great self defense skills, but also a great and healthy life style. I believe that San Da is something that can benefit everyone. San Da Training Systems will be the vehicle through which I will offer seminars, DVD and eventually books which will make the material and the philosophy available to everyone.

A very preliminary web site was launched today. In the next three months I hope to finish two DVD's. Anyone interested feel free to visit us.

Tell us a little more about your program. Who are the instructors? Where were they trained? King of San Da USA, what is going on with that? What makes San Da better than other arts? Thanks for replies.

If you read the web site, some of your questions will be answered...

As for my credentials, I have trained champion level competitors in a variety of formats including San Da, Muay Thai, Kickboxing, Amateur Boxing and amateur MMA. The NYKK team has two workd champions, has won 16 national titles, been finalists and semi-finalists in NYC Golden Gloves three years in a row...

I'm not going to get into a "better" pizzing contest on the net, that's pointless. Look a little more into NYKK and learn about what the program has produced. Ask Scott, you know him. Take a seminar or when they are ready buy a DVD, see if you find value.

As for the comment about not competing, that's silly, as I just said, we compete in EVERYTHING, all the time...

Have a good one

Sounds Good about time someone got going.Do you think I would be able to pass the level one certification.
I plan on training one year before I attempt it.
Later Scott

Scott, you could pass level one even with a case of the FLU :) Better yet, we want San da guys to have some ground skills for two and three, and from what I hear you're already well on your way!

read the requirements for certification...

we updated over the weekend with some more details and the seminar listings...

ttt for the new seminar listings

Adam Cannon, how about you answer the question that we've been asking for a month now...

That question, to refresh your memory, is why you claim to have sparred and easily handled Marvin Perry when Marvin says he's never even met you?

If you want us to take you at all seriously, you could at least say when and where you sparred Marvin. The idea that you, an amateur with a pathetic 3-2 record, could "easily handle" a pro champion who won his MT title in 54 seconds, who is undefeated as a PRO and has only one loss in over 25 amateur matches, is simply ridiculous

I think you are trying to take the Phil Baroni approach to getting attention. You asked for a pro match in all this nonsense! Most promoters wouldn't even put you on an all amateur card with your record!

Anyway... seminars are listed at www.SanDaTrainingSystems.com

DVD will be ready shortly...

I will be doing more seminars around US, details on that shortly

Did I tell everyone here how about a year ago I knocked Lennox Lewis on his butt in a sparring session, it was just sparring on all, but Don King, I want a big money fight!

Dude, you are boring me to death here. If you really wanted a fight with Marvin, there were three promoters all looking for matches for him, no one wanted him after the 54 second KO of the Thai champion. Even if somehow you actually showed, why would someone give you a shot with an amateur record of 3-2? Like I said you are C class...

I know you're desperate and grasping at straws, but don't you realize how silly you make yourself look in all this?

NYKK has TWO LOCATIONS, we have over 200 people active in each location. If that's your idea of "near desolate" then fine, most would think you're a cook.

Do I hand out flyers, yes, damn, you got me! Wow, I hand out flyers. I stand on the most crowded corner in NYC (34th and 8th) (EDIT: which, by the way is like 6 blocks from Renzo my friend: I wouldn't be crude enough to stand in fron to someone's school, neither would Renzo) and hand flyers out to cute women all day, who then come into my gym and give me money. If that's something to be ashamed of, man I am guilty!

Now, since you asked so nicely, YES, we ARE having a seminar this Saturday. It's 12 noon to 3 pm.

It will be filmed for a DVD release

After that, we have two more seminars already set.

All the info can be found at www.SanDaTrainingSystems.com

Like I said, you're grasping at straws and just making yourself look really foolish

Sanctioned by the IKF (www.IKFKickboxing.com)

You can check their old news page

You can check their san shou rankings

This is Ian Morgan (seating, beat one of Fairtex's amateur champions on same night), Josh (who won the title), myself, and Steve Ventura 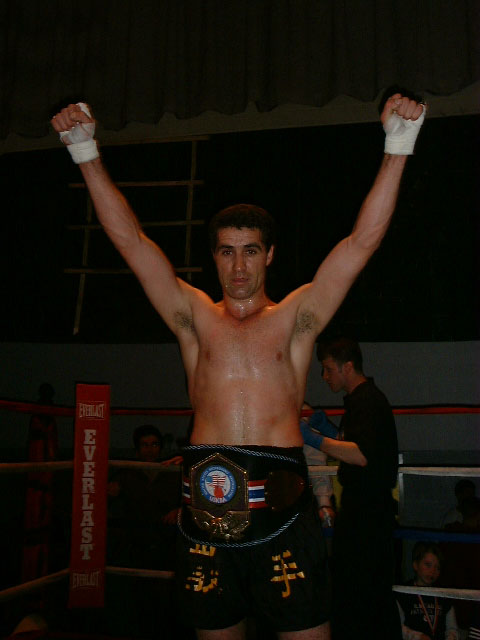 You can look that one up on www.USKBA.com

Richard Acosta (standing over Russian MT champ he Ko'd in one round) holds many titles including ABOC 2003 Champion, 2001 ICMAC Champion, 5th US Open Champion and a Silver Medal at 2002 USWU championships 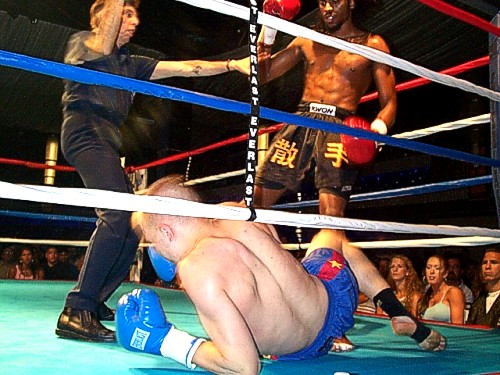 Elan Schwarz was a former member of US National San Shou team, and ISKA Light Welterweight Champion and had 3 silver medals

In amateur boxing, we've had semi-finalists and finalists in the NYC Golden Gloves pretty much every year for the past 4 years.

HAVE A GOOD ONE!

Are you at all affiliated with the some SanDa fighters coming out of China? If so, do you come to China occationally? The reason I am asking is because I am based in China.