The history of Paul Harris-(Rousimar) 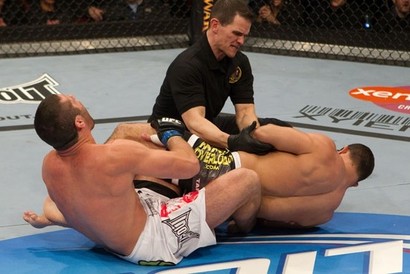 Guilty of holding on too long^^ Bad gif but Rousimar was almost asking for a "time out" to the ref because he just couldn't believe that someone escaped a leg lock attempt.  There are random occurences of fighters making a mistake, or not knowing the rules. When it's one fighter who has these things happen consistently, you have to start to wonder....

This fight against Dan Miller Rousimar shows another example of how he is completely obvlivious to a referee. It's like he determines when the fight is over in his own mind. 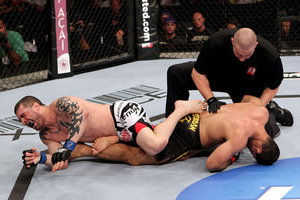 Guilty of holding on too long

When asked if Rousimar can let go of a tap in a reasonable time consistantly?  Rousimar responded with:

This motherfucker keeps getting fights and Paul Daley is banned for life, it fucking sucks.

Seriously OP, just look at Dan Miller's reaction after Toquino let up on the GNP. He just walks to his corner as if the fight is over, no immediate protest the the ref about the stoppage.

Sucks. There's a definite psychological battle their ALL playing. Paul is saying, get in the cage with me and I'll fuck u up. I'll intentionally break rules forth set by the commission. Which gives him a psychological advantage over another fighter, no matter how tough they are.
It seems the UFC has to even out that "impending doom" Feeling associated with Paul, by taking away his SOTN, maybe in hopes that next time he'll keep it in mind and defer to the referees commands. But a guy like Paul Harris? Fuck. Where does this fella find training partners?

BARUERI, Brazil – Rousimar Palhares' manager, Alex Davis, doesn't believe his client has ever intentionally injured another human being. That said, he is expecting further sanctions following Palhares' controversial win over Mike Pierce, and he admits the powerful submission ace needs to adjust his approach to fighting. "We have talked about it at length," Davis today told MMAjunkie.com. "The one thing I can certify is that Rousimar does not hold on to a sub out of malice. It's unconscious, a mix of adrenaline and years of being conditioned to not let go."

Babalu was cut from the UFC for doing the same thing with an anaconda choke.

Thanks for the words 8flat.

I just want to say, that although I made this thread, I feel bad that Palhares is banned from the UFC.

I certainly hope this thread didn't help infuence and/or justify him being banned.

Thinking positive.....Paul Harris vs Askren anyone?

He would be LHW champ right now.

Haha true dat. But fuck Paul Harris he is an ass.

Good for the UFC. As good as he is, he is a huge liability for the company.

Thanks for the words 8flat.

I just want to say, that although I made this thread, I feel bad that Palhares is banned from the UFC.

I certainly hope this thread didn't help infuence and/or justify him being banned.

Thinking positive.....Paul Harris vs Askren anyone?

Holy shit I would f-ing love to see him against Askren!!!!!

What else did everyone expect to happen? Everyone who saw it live saw that David and his brother were being very obtuse about it, and he got what he asked for.

I don't think he's all there in the head.