Topuria is infinitely more skilled than Paddy. I like Paddy but Paddy will avoid him like the plauge

Thread title already says it all

Paddy is going to duck the shit out of Topuria lmao

Paddy would only fight Topuria for 100million. Because only that amount of money could soften the blow of losing his manhood to Topuria

What excuses do you guys think Paddy will use to duck Topuria? I will go first

“I will only fight him if he gets vaccinated and does the paperwork to become an official UK citizen, and then he must give me his social security number and bank details. All these requirements must be met by Teusday”

*Paddy thinking to himself, “thank goodness i will never have to get in a ring with Tompuria. No way he meets these requirements. I wouldnt even myself. Im safe for now”

If this fight gets made down the line, it would be pretty incredible though

(You see it all the time in boxing. Rivalries and friendships from the amatures carrying into the pros and becoming huge)

Only Conor vs Max could fit that criteria in MMA, but theres no way they ever rematch in their primes, unless Max goes to 170

I hate knocking off prospects, but Im all about these doing going at it

I don’t think a single UFC loss knocks off anyone as a top prospect in the UFC. We see fighters go on to win UFC belts after losing one of their first few UFC fights all the time. Hell, sometimes we see guys with double digit losses going on to win titles. But yeah, in the deep LW division, you suffer too many losses early in your career and you likely get lost in the pack.

Down the line it will be amazing

The only concern is that:

ps And theres nothing wrong with Paddy not being a great fighter. Not everyone can be an all time great. Everyone has their role to play. Paddy is still an insanely popular fighter and will continue being popular even if he losses. I mean look at Darren Till. Till has choked in every big fight hes had yet hes still loved in the UK

Cody and Thomas fought when they were both super talented prospects. Everyone was expecting Cody and Thomas to meet again as champions. Except Cody became a 1 hit wonder and Thomas never became anything.

Paddy is def the 1 most likely to become another Cody/Thomas except he will always have a fanbase. While Topuria is clearly championship material.

The longer you wait to make Paddy vs Topurua the less and less likely it is that their paths cross. And thats exactly what Paddy wants. Paddy knows Topuria humilates him

Thinking about all this kind of makes you appreciate the career of Conor more. Its insane to think about how many future champions Conor fought on his way up. Green Conor fought green versions of Max and Poirier. Conor and Poirier did have rematches in their primes so that rivalry did continue to the championship level. Conor and Max have yet to rematch though. Poirier is a bad match up for Conor. Conor will still beat Max because Conor excels against orthodox fighters off the clashing of leadhands. He will shut Max’s jab down.

I would have to say of these big 3 all time greats (Conor Max and Poirier) who met while young and carried their rivalries to the championship level, Poirier proved to be the most skilled one. He whopped Conor and Max. Conor would whoop Max. Max was proven to be the worst of the 3. Max doesnt beat Poirier or Conor

I like the prospects fighting the vets , bring some new blood to the top of the divisions

Thats not fair to the vets. Prospects need to stop being pussies and prove themsleves against each other for the right to fight the vets

Defend your spot or get out the way

Defend your spot or get out the way

Err no! Prospects NEED TO DEFEND THEIR RIGHT TO FIGHT A VET. A PROSPECT NEEDS TO EARN IT

“I won’t fight top 15 until the UFC adds 0’s to my pay.” In other words, I am not a good fighter and I don’t plan to fight that hard. I just want to ride the hype that fans who prefer talk over substance provide me and make money.

Paddy is limited in skill but not in business sense.

Fair enough. At the end of the day that’s what it’s all about. Being a smart businessman

If you’re a fighter. But if you’re a fan of fighting, that is anti-what it’s all about.

Hey if he is that popular over there they should just book Conor vs Pimblett for Conor’s return fight. Honestly if Conor lost his return and Pimblett did beat a top 15 next they could do that fight… huge ratings and hype in Europe and a W there for Conor most likely plus Pimblett would get paid, win win for everyone.

Lacking in what skills?

He needs to learn to tuck his chin… Other than that, all good.

It’s been an issue since regional fights. 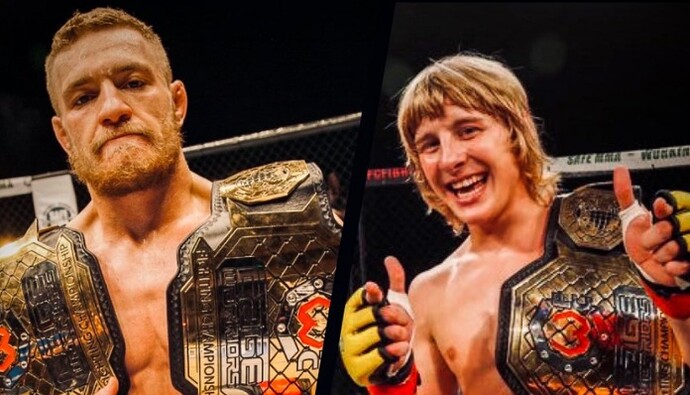 “He’s a good kid Paddy,” McGregor said. “The Scousers. You’ve got to love the Scousers. You know my father was born in Liverpool, one side of my family is from there. So I’ve got a lot of love for that part of the world. And, who knows? You know, I will never say no to nothing. You know what I mean? Never say never as they say.”

Yeeeerah… I can see it from his record :-/