Who Should Gordon Ryan face next?

Gordon Ryan made light work of Andre Galvao at ADCC 2022 after beating Nicky Rod for the Heavyweight championship… who is left for him to face? Who could offer a competitive match? Yuri Simoes? Vinny Magalhaes is the last unavenged loss for Gordon… Anyone interested in the Pena rematch?

He should battle everyone on your list back to back. Nothing left for him to do. Bring Roger, rickson, arona and MG out of retirement to add to his stack.

I’ve predicted that he would retire after he ran a train on all of the top competitors this year.

Retire at 27 years old? that would be a damn shame but it would definitely ensure leaving on top

Maybe Gutemberg Pereira who won one of the Brazilian ADCC trials but couldn’t compete due to injury. 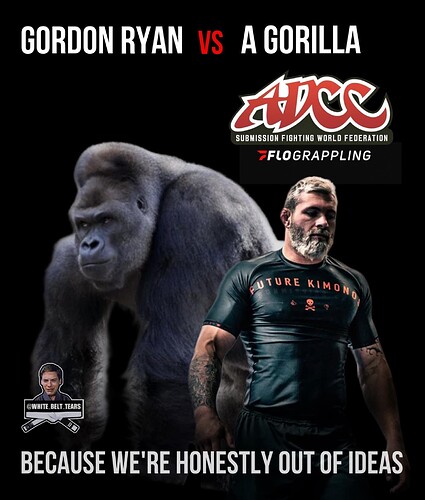 they could get this sanctioned in Florida hahha

Roger if he would come out of retirement

Kaynan won 99+ last event and 99 this one. Seems like a good matchup

Gordon didn’t tap Victor(?) this past weekend. Guess you could sell that match.

Who was the guy absolutely smacked the soul out of?

Let’s wait till Gordon is 65 like Rickson, then talk about bringing him out of retirement to face who ever the “greatest ever ever” is.

I think it has to be Kaynan

I think him and Nicky Rod are just at the beginning of a long cool rivalry, but Nicky still needs some time to develop

I want to see him in a tennis match against Floyd Mayweather.

Whatever happened to Quintet? That’d be a way to see him against high-level guys back-to-back

I think it has to be Kaynan

I think him and Nicky Rod are just at the beginning of a long cool rivalry, but Nicky still needs some time to develop

I don’t see Nicky ever getting as good as Gordon.