Could Ad Santel have competed with the Gracies?

Josh has a black belt because he went to a tournament and when he entered the nogi division everyone else dropped out. A sponsor selling gi’s donated him one and chris haueter promoted him to black belt without ever having took a class, so he could compete

i remember it as chris haueter, of course i drank heavily and used various substances in those days

sakurai only beat pederneiras by advantage, that was the high bar division for adcc. When JJM submitted everyone on the way to winning it, it caused quite a splash. Mach was really slick on the ground but jjm was slicker.

i remember it as chris haueter, of course i drank heavily and used various substances in those days

Seems both are correct: Josh Barnett: 'I Was Awarded a BJJ Black Belt & I had NEVER Trained BJJ'

He has one because Rigan and Erik Paulson gave him one, but he said he has never trained in BJJ specifically.

Kind of strange since he has a 2nd dan in BJJ. Rigan just gave it to him?

Kind of strange since he has a 2nd dan in BJJ. Rigan just gave it to him?

Wikipedia claims he has a second-degree black belt, but if you click the source 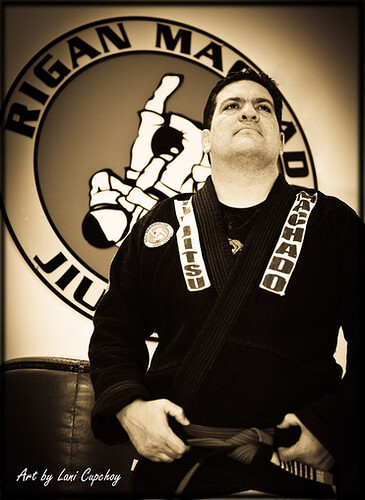 he’s not even listed on the page.

So, it was honorary? Kind of like what Kuk Sool Won did for goodridge.

So, it was honorary? Kind of like what Kuk Sool Won did for goodridge.

Rodney King had a black belt and couldn’t fight off those cops?

Rodney King had a black belt and couldn’t fight off those cops?

They were trained in catch wrestling.

No, it’s not honorary when he’s competing at that level. Goodrich didn’t compete in kuk sool, they were just trying to get some publicity by attaching kuk sool to the ufc

His jkd bullshit canceled out the effectiveness of his bjj

Ah, yes. In Gooridge’s case it was more about publicity for KSW.

But if Rigan gave Barnett a BB in BJJ, it sounds honorary, which is weird since the Gracie’s and probably the Machado’s are very stingy with handing out BB’s. Heck, you would have to train for 101 years before Rorian tested you for BB.

Heck, you would have to train for 101 years before Rorian tested you for BB.

Trapping was never his forte.

Isn’t that the guy who lost to Mayhem Miller and Ralek Gracie?

It was given by Paulson and endorsed by Rigan. Belting systems are always subject to individual interpretation, but I don’t see how anyone could say Barnett isn’t at BJJ BB level, even if he has never taken a class.

After he beat royler, renzo, ryan, royce and made rickson show the white feather. That guy? He trained on marlboros and sapporo, and was middle aged when losing to ralek and mayhem.

Saku was an awesome fighter, but what he did was an anomaly. No one beat the Gracie’s back-to-back like he did. Sure, some grapplers were able to beat a Gracie once in a blue moon, but the Gracie’s were the most dominant grapplers of all time.

99% of the fighters in MMA has some kind of rank in BJJ. Why? Because it utilizes techniques and strategies that WORK IN REAL LIFE!!!

Now go home and get your shine box.