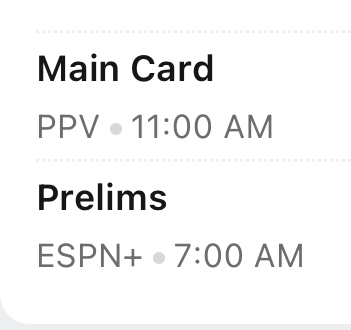 Tight you say? A little grease might loosen things up.

Casuals need to watch another brady fight not only the one with chiesa.
Its becoming ridicolous how badly brady gets underrestimated in this casual forum.

Thats some good one.

Dont take it to seriously. Settling down with 28 is mid-tier beta behaviour.

Real alphas settle down between the age of 35 an 45 when they have a company running and can afford a 18 year old 10/10 hottie while the betas around screaming “this is pedophilia”.

What the fuck GUS GOT KO’d a week ago by Krylov? I had no idea. He’s beyond done, that’s four finish losses in a row.

Casuals need to watch another brady fight not only the one with chiesa.
Its becoming ridicolous how badly brady gets underrestimated in this casual forum.

Thats his one ranked fight, tho.

Also I think its the combination of Brady and Belal that might make it more stalematey.

TBH every PPV should be at least this level

TBH every PPV should be at least this level

The Diaz/Chimaev card is a joke

Yeah, looks like a joke, but it isn’t really. It’s bye bye for now, and we’re not gonna give you any favors on the way out.

I can believe Nate asked for the fight, but I can also believe that the UFC had no intention of making the card have mass appeal outside of the main event names.

Carry it if you can. Bye. Signed, UFC.

Saying it was his only ranked fight is fair, ignoring brady was injury ridden and in his worst physical form of his carrier is not that fair.

Also he is probadly one of the very few fighters belal cant just simple lay n pray to dicision. I would say he is the best fighter to made belal an exciting fight.

The Brady/Belal fight might very much resemble the Brady/Chiesa fight. Belal will have the standup advantage but wont have the power to stop Brady. Brady will be the stronger better wrestler but wont be able to gain great ground advantages. Over the course of 3 rounds I imagine Brady will have enough top control time to beat Belal.