To me, Khabib is like Vince Lombardi’s Packers back in the day … this is what we are going to do, nothing fancy, no trick plays … now try to stop it. No one stopped the Packers and no one stopped Khabib. Everyone knew to stay off the fence, avoid trips, strike from a distance, never stop moving, don’t grapple with him, control the center … but no one did these things, perhaps because they couldn’t.

You don’t know that. He never tried to fight someone with a high level ground game.

Other than Olivera though, who was there at 155 to fight? The Ferguson fight was cursed, he dominated RDA, Dariush wasn’t the level he is now so they never crossed paths. You can’t honestly think someone like Gillespie would have had anything for him just because of having good wrestling. 155 doesn’t have the elite grapplers 145 and 170 do and Khabib dominated. Maybe it was a favorable point in time for him but thems the brakes.

All the greats went and found a challenge if their wasn’t one in their weight class. Everyone talks about Khabib being welterweight size. Plenty there. Ferguson had a 12 fight win streak and a better ground game than anyone Khabib fought and some how never got a title shot. He also some how was able to avoid Charles, and the whole time UFC is feeding everyone a steady diet of Khabib is the greatest ground specialist ever. All we know for sure is his grappling is good enough to beat RDA by decision. As far as I can tell the highest level of grappling he chose to test himself in was NAGA. Do a wrestling match against a top wrestler. A grappling match against a high level Ju Jitsu practitioner. Until then Khabib’s grappling is just above RDA. Saying anything else is just hype.

Kevin Lee showed signs that his ground game was more effective against the guys Khabib faced and Oliveira smoked him.

Kevin Lee showed signs that his ground game was more effective against the guys Khabib faced and Oliveira smoked him.

I said ground game. He chose to kick box. He was still very dominant on the ground.

All the greats went and found a challenge if their wasn’t one in their weight class. Everyone talks about Khabib being welterweight size. Plenty there.

This is bar none the dumbest shit anyone’s ever said to argue against someone being the GOAT of a weight class.

Who’s the dumbass? I never was trying to argue that. If you read all my posts I keep telling everyone I’m not trying to do that.

I said ground game. He chose to kick box. He was still very dominant on the ground.

Khabib won 2 10-8 rounds against Al on the ground in one fight.

Lee lost both fights without ever taking a 10-8.

All the greats went and found a challenge if their wasn’t one in their weight class.

Best ever, beat one alcoholic, over hyped gaythje who barely win fights, best win RDA, nobody knows who’s the other 25 fighters
The All time greatest! XD

Who was he supposed to fight?

Here he is next to the Heavy weight champ. He looks big enough to fight middle weight if he wants. 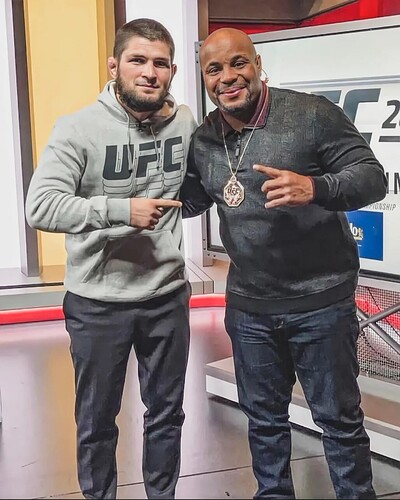 Different promotion the whole time they were fighting, canceled 4X, wasn’t top ten, wasn’t top ten. None of these are realistic considering the timing.

Adesanya, Usman and Volk all have better claim to all time great over Kabob.

LMAO at this. That is fucking hilarious. When Hughes was active no one ever claimed he was a super striker. Hughes was about as pure of a wrestler as you can be. He was very good, but never ever was striking his best attribute.

BJ Penn fought the light heavy champ and this was when Lyoto was about to enter the Lyoto era.

Well, in OP’s defense there are many people named Khabib in this world.